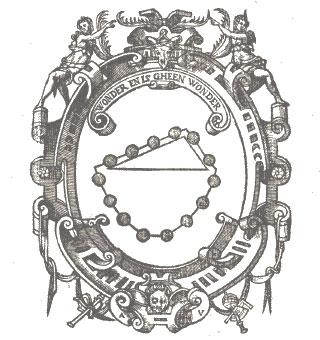 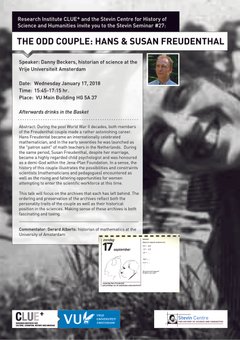 Research Institute CLUE + , and the Stevin Centre for History of Science and Humanities invite you for Stevin Seminar # 27:

Speaker: Danny Beckers, historian of science at the Vrije Universiteit

Afterwards drinks in the Basket

Abstract: During the post World War II decades, both members of the Freudenthal couple made a rather astonishing career. Hans Freudental became an internationally celebrated mathematician, and in the early seventies he was launched as the "patron saint" of math teachers in the Netherlands. During the same period, Susan Freudenthal, despite her marriage, became a highly regarded child psychologist and was honoured as a demi-God within the Jena-Plan Foundation. In a sense, the history of this couple illustrates the possibilities and constraints scientists (mathematicians and pedagogues) encountered as well as the rising and faltering opportunities for women attempting to enter the scientific workforce at this time.

This talk will focus on the archives that each has left behind. The ordering and preservation of the archives reflect both the personality traits of the couple as well as their historical position in the sciences. Making sense of these archives is both fascinating and taxing.

Commentator: Gerard Alberts: historian of mathematics at the University of Amsterdam